It's About (Avoiding) Writing

I have a report due this Friday, I have a conference abstract due on Thursday, and I've been neglecting my Venus blog.  Oh, I've also floated the idea with two colleagues of submitting some work we did for publication, and that has sat with no action now for a couple of months.

What time is it?  It's Writing Time.  And at just the perfect moment, it also is the first day of Academic Writing Month 2014!  I signed up, of course, because I'd rather have a little fun tweeting and blogging about writing, instead of ACTUALLY WRITING.

Okay, I've had my bit of fun, so I better get to it.  Wait-- I need a plan!  I guess I can avoid real writing for a few more minutes by jotting down a few notes about how I might succeed.

The 5-page report on Computing and Communications for my PicoSat Design course is a major part of my grade, and the deadline (this coming Friday) is pretty much carved in stone... so this needs to happen first.

Of course, the conference abstract is due even sooner, so IF it is going to happen, it needs to happen soon.  I'll need some input from other members of the team at UND.

The paper on asteroid mission alternatives already exists, but needs to be improved substantially before it is fit for publication submittal.  There are a number of steps to this, but the first is incorporating several comments from our professor.  This is the best candidate for AcWriMo motivation, because no one is making me do it!  If it doesn't get done, no harm done.  But if I can push it forward, I will never regret it.  Nevertheless, I can't even think about it until the other two items are written.

Here's when things need to be done:

2021. Eight years from now.  If NASA can keep it on schedule, that's when the first human crew will be launched into space aboard NASA's Space Launch System (SLS) Block I launch vehicle.  The mission will essentially be a repeat of Apollo 8, whose capsule and crew orbited the Moon and returned to Earth in December of 1968 (a mere seven years after the first successful Mercury launch).

NASA formally announced the SLS in September of 2011, so they've already had two years to work on it... meaning a full decade from concept to launch.  And remember: it is based on mostly off-the-shelf technology.

Why should I be excited about the SLS?  Sure, if it were here today, we could launch people and equipment into Lunar orbit and beyond.  But eight more years? And that assumes no slips in the schedule.  We know how often that happens.  We are more likely to not see humans flying the SLS until 2023, if it hasn't been canceled.

In the meantime, the Dragon and the Falcon family of launchers will be human-rated (and possibly joined by launchers/spacecraft from other commercial suppliers).  And while SpaceX is busy ferrying people and supplies to the ISS on NASA's nickel, Elon Musk will be working toward loftier goals.  The next few years will be exciting times for space exploration, but other than an un-crewed test flight four years from now, the SLS will not play much of a part.

1st-graders filled with enthusiasm for the mighty SLS by NASA's educational and public outreach efforts?  They'll be paying speeding tickets before they will see a meaningful launch.

So I'm going to set an alarm for 2021, and then I'll consider getting excited about the SLS.

A newly discovered magnetic state for the Venusian ionosphere

We have known since 1962 (thanks to Mariner II) that Venus does not possess a magnetic field of its own (Sonett 1963).  In the late 1970's, the Pioneer Venus Orbiter's magnetometer detected large-scale, steady magnetic fields in the Venusian ionosphere  during solar maximum, when the solar wind dynamic pressure was great enough to overcome the ionosphere's thermal pressure.  These magnetic fields are mainly oriented horizontally, and often exceed 100 gammas (Luhmann et al. 1980).

Even when the ionosphere was not dominated by the solar wind, the Pioneer craft detected small-scale magnetic features interpreted as flux ropes, structures that resemble a helix of woven magnetic fields, not unlike a rope.  This led researchers to conclude that the ionosphere's magnetic state could be categorized in two forms: magnetized, and unmagnetized with some small-scale flux ropes (Luhmann et al. 1980).

A recent publication aims to change this long-standing picture of the Venusian ionosphere, as a result of observations made by the Venus Express spacecraft since its orbit was modified such that it now reaches periapsis at a latitude of 90 degrees (over the North pole) and a height above Venus of only 170 km (well into the ionosphere).

T. L. Zhang and colleagues (2012) report that during solar minimum, Venus Express observed "giant flux ropes" embedded within a magnetized ionosphere.  They determined these woven structures to be on the order of 100 kilometers in diameter, 10 times the size of the flux ropes detected by Pioneer in an unmagentized ionosphere.  The magnetic flux contained within the giants ropes measures near 1000 Webers, much greater than the 2 to 3 Weber fluxes in the small ropes.

It is notable that in over 100 orbits when the Venus Express magnetometer detected these enhanced magnetic strength structures, they detected only one such giant rope during passage through periapsis. In addition, while the giant rope structure is seen as a single event by Venus Express only near 90 degrees latitude, the small flux ropes observed by Pioneer occurred throughout the dayside atmosphere.

These researchers propose that the Venusian ionosphere has a third known state, in addition to the two mentioned above (Zhang et al. 2012).  The possible states are:
And what do they believe is the cause of these large-scale magnetic helixes?  It remains "unknown and speculative."

It is interesting that Venus is not the only rocky planetary body in our solar system to display magnetic flux ropes.  The Mars Global Surveyor spacecraft has detected flux ropes in the ionosphere of Mars, and Cassini has detected twisted magnetic fields in the lower ionosphere of Titan that resemble the flux ropes observed on Venus and Mars (Wei et al. 2010).

Email ThisBlogThis!Share to TwitterShare to FacebookShare to Pinterest
Labels: venus

Are you a planetary scientist studying the Venusian atmosphere, or an engineer looking to build spacecraft or instrumentation that will further the study of our twin planet?  Then clear your calendar on January 24th, 2013.

NASA's Glenn Research Center, along with the Ohio Aerospace Institute, is sponsoring a Science and Technical Interchange Meeting (STIM) on the topic of Venus Upper Atmosphere Investigations.

The aim of this day-long set of meetings is to encourage the discussion of shared goals and priorities with regard to the study of the atmosphere of Venus by spacecraft.

According to the agenda, they hope to

If you cannot attend in person, they may be making arrangements for attending remotely-- I have a question out to one of the organizers and I'll update this post accordingly. 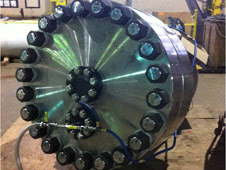 If you are lucky enough to be able to travel to the workshop and can arrive a day early, they are planning a tour of the nearly-completed NASA Glenn Extreme Environments Rig (GEER) on the afternoon of the 23rd. Once completed, the GEER will be able to accurately simulate any planetary environment in the solar system, including both the surface and the atmosphere of Venus. Read more about the GRC's Strategic Science work here.

If you are interested in attending, registration is required.
Posted by Paul Wren at 8:22 PM No comments:

While one Soviet Venera spacecraft certainly passed near Venus prior to August of 1962, it was not successful in transmitting any data back to Earth... so Mariner II gets the credit for being the first successful probe to visit Venus.

Launched on August 27, 1962, Mariner II carried the following experiments intended for use at Venus (other instruments also took measurements of interplanetary space while enroute):

Mariner II arrived at its encounter point on December 14, almost four months after launch.  Never intended to enter orbit or plunge into the Venusian clouds, the spacecraft began recording as much information as it could in the short time Venus would be in range (the spacecraft was moving at 6.743 km/s relative to Venus).  A special command from Earth placed Mariner II  in "encounter" mode, during which it transmitted all recorded data in real time.  It passe within 34,854 km, and seven hours later, Mariner II returned to cruise mode to continue on in a heliocentric orbit.  Communication was lost on January 3, 1963.

So what did we learn about Venus from Mariner II?
Mariner II was successful by any measure, and set the stage for continued exploration of the inner solar system.  It was followed to Venus by a number of probes from the U.S., the Soviet Union, and the European Space Agency.  More to come!

Email ThisBlogThis!Share to TwitterShare to FacebookShare to Pinterest
Labels: mariner, venus, worth half a picture

Earlier this week, news outlets and Twitter were abuzz with recent news of a "rogue" and "orphaned" planet detected "wandering" through space a mere 100 light years from us.  I found this kind of reporting somewhat misleading, since it conjured images of a planet that was somehow flung out of orbit around its parent star, now left all alone in the cold... wandering... and even though the BBC article did a pretty good job of conveying some of the scientific conclusions, they still used quotes from the study's authors that sensationalized the "homeless planet" idea.

Philippe Delorme and his colleagues begin their report by questioning the dividing line between planets and star-like objects.  Currently, the Astronomical Union defines a planetary mass as one falling below the necessary minimum for thermonuclear fusion of deuterium (roughly 13 Jupiter masses), with brown dwarfs and stars above that line.  And while this new object weighs in far below that mass boundary and physically meets this criterion for a planet, there's more to the story.  It seems CFBDSIR2149 is tagging along with 30 or so young stars (similar in both age and composition) known as the AB Doradus Moving Group (ABDMG).  This association means it is likely about the same age and that it formed under similar circumstances.  For this reason, Delorme, et al. speculate that CFBDSIR2149 is an object resulting from stellar formation processes.  And even though its mass is insufficient to burn deuterium, it should not be classified as a planet.

What they think they know:  CFBDSIR2149 is a free-floating substellar object with a mass of 4-7 Jupiter masses, a surface tempurature of ~700K, and is likely a member of the AB Doradus group of stars that are between 50 ans 120 million years old.

Email ThisBlogThis!Share to TwitterShare to FacebookShare to Pinterest
Labels: astronomy, brown dwarf, exoplanet, worth half a picture

Have you read about AcWriMo?  Yep, its a sort of National Novel Writing Month (NaNoWriMo) for academic writing.  I've decided to participate, and yes, I'm a little late to the game (It's already November 6).

This is where I make set a crazy goal: Complete a publishable (format and content, anyway) literature review of current thinking on astrobiological possibilities (past and present) for Venus by November 30.

Go Public: I just did with this blog post!

Strategy: Well, it's like writing anything, so there is a sequence for me:

There is a fair amount of rinse & repeat between steps 1 and 2, since good papers will lead me to others.  Even so, there is something to be written every day, almost from the beginning.

Discuss: I will.  I'll be posting here and on Twitter at @ElevenPointTwo.
Posted by Paul Wren at 3:27 PM No comments: